It is hard to imagine now, but in the early 1980s translations were often written out long-hand, checked and typed up on an electronic typewriter, before being dispatched by post or courier 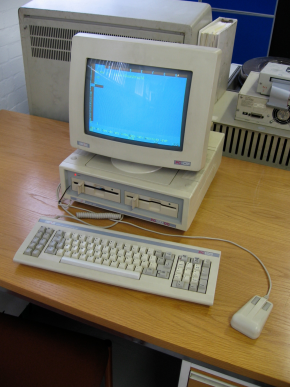 Translators’ offices were lined with bulky tomes and our desks groaned under the weight of open dictionaries and reference books. Despite all the poring, it was hard to nail down obscure terms and you had to spend a lot of time on the phone consulting colleagues or trying to find someone who might know.

In the mid-1980s, a lot of translators bought Alan Sugar’s first dedicated Amstrad word processor but I hung on a bit longer and waited for the first Amstrad PC, complete with 5¼ inch floppy disks. In those days, WordPerfect was the word processing program of choice and Microsoft Windows had not been invented. I had to print off most of my translations and race to the post office in time to catch the evening post.

About that time, the earliest enormous fax machines started to replace motorcycle couriers and snail mail. My first mammoth machine cost over £2000 and had to be paid for on a 5 year lease. We used to offset the costs by charging by the page to send and receive faxes.

In the 1990s, computer-aided translation memory tools began to appear and I translated Fiat manuals on an early program known as Xerox workbench. Fiat then moved over to Trados, which subsequently became SDL and I am still using SDL Trados Studio software.

When the first laptops and dial-up internet connections arrived, our work became more portable. Working away from home was still a fraught procedure, involving transfer of files from desktop to laptop on floppy disks and then higher-capacity memory sticks. Sometimes paying for dial-up internet connections away from home led to such mammoth phone bills it swallowed up any profit made from working on holiday. The advent of email made life much easier as we could simply send and receive work as attachments.

More and more tools emerged for increasing productivity, quality and accuracy including voice recognition programs, the acknowledged favourite of translators being Dragon Dictate.

One of the great advantages of translation as a career is that our workplaces have now become entirely portable. We can now work as digital nomads anywhere in the world with an internet connection and the same files can be accessed, backed up and updated from different locations thanks to services such as Dropbox.

Dictionaries, glossaries and endless useful corpora are available online. We can track down the most obscure terms in seconds and supportive colleagues will help out with tricky phrases in an instant through the many translators’ Facebook pages and peer sharing sites.